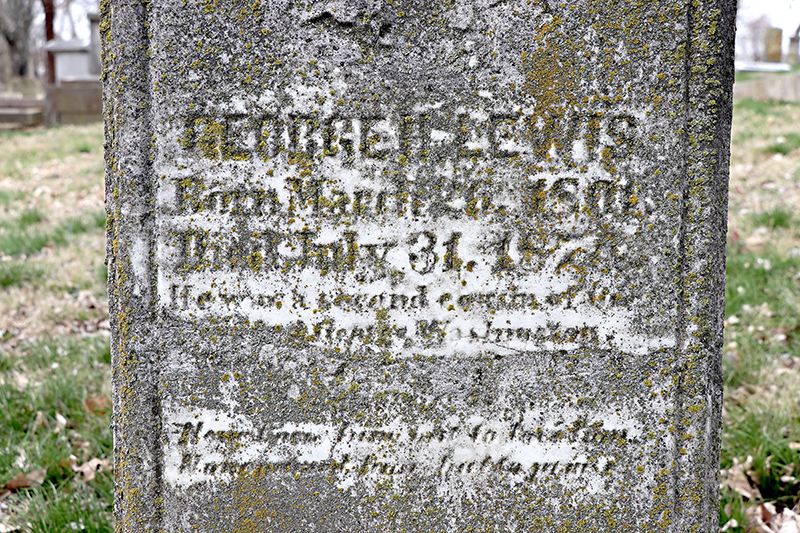 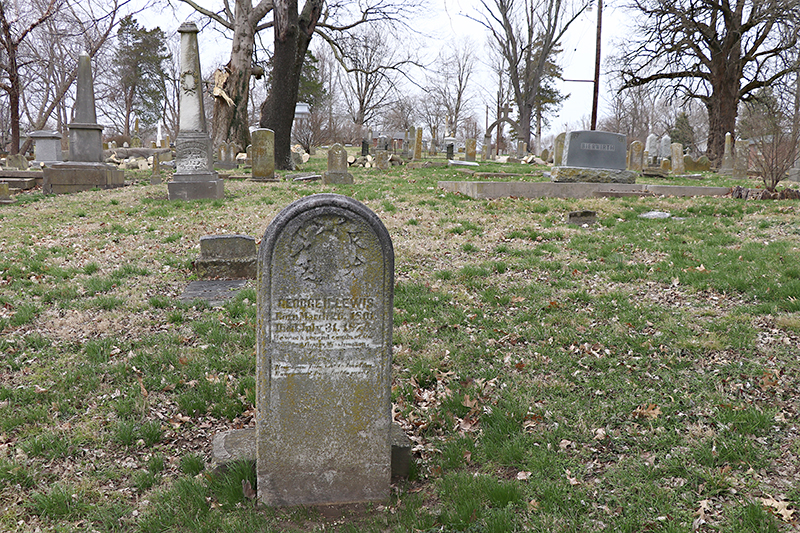 The grave is in the Old Lorimier Cemetery, Cape Girardeau, Missouri. In this view, you can see the surrounding markers, including the archway with the cross and a fenced area to help in locating the stone. Walk down the concrete path in the middle of the cemetery to the end nearest the river and step off to your right. As you walk past the big tree, you will be able to see the marker. (Photos taken March 12, 2019.)

At last tis known who George H. Lewis is – or rather, was.  This is the Lewis buried 1874 in Old Lorimier Cemetery—on whose tombstone is inscribed! "He was a second cousin of the President George Washington!"  Those words have intrigued viewers for over 100 years, particularly viewers named Lewis.  From the time I first saw that stone I wondered about the man beneath it, but not until recent years did I make an effort to "uncover" him.

On occasion the local newspapers have reminded readers that a kinsman of our first president lies buried here in Cape Girardeau.  Even so, through the years George H. Lewis remained a kind of mystery man.  Then in 1938 somebody thought to examine probate records.  These revealed that Lewis had owned a farm near Allenville, a wagon and team and other arm equipment, and that he was survived by a widow and three children.  Interesting, but this information did not furnish clues as to the man's origins or as to how he and his famous cousin were connected.

The Bicentennial gave impetus to the idea of "running down" George H. Lewis.  Knowing that George Washington's sister had married Fielding Lewis, I made the mistake of looking first in that direction.  Of course!  Any male descendant of Betty Washington would be her brother's nephew, grandnephew, great-grandnephew, and so on, but never a cousin.  My mistake proved profitable, however, a valued book for background information.

There were Lewises in Washington's background, though not as direct ancestors.  His paternal grandmother Mildred Warner Washington, had a sister, Elizabeth, who married John Lewis.  The sons of John and Elizabeth Warner Lewis produced prolifically so it follows that George Washington had second cousins by the dozens--cousins surnamed Lewis!  Of the Lewis second cousins, 17 were male, and all but two of these were within ten years of Washington's age.  No wonder that I could not find George H. among them.  He wasn't born until 1801, a god three generations later!

At this point doubts began to arise regarding the accuracy of the gravestone inscription.  The existence of kinship between the two Georges was never questioned -- but second cousins?  I was certain--I still am -- that everyone of Washinton's second cousins named Lewis had been accounted for, who then, was George H. Lewis?

Came the dawn!!  No, the antecedents of George H. were not revealed in a blinding flash.  I just realized that the words second cousin held a different meaning for the inscription writer than they held for me.  I know that the children of first cousins are second cousins to each other, but did she/he know it?  perhaps "first cousin twice removed'. Could be, since there was no evidence to support the second cousin claim.  Semantics!  Here was a perfect example of semantic confusion.

George Washington had one own cousin named Lewis--Catherine "Kate" Washington, first wife of Fielding Lewis.  Kate died leaving little Johnny.  Johnny grew up and married five times.  I pinned my hopes on John (ny) for any child of his would be Washington's first cousin twice removed.  Surely George H. would show up here as John Lewis' son.

Alas, George didn't!  That fact (and the names of all John's children) was determined only after I had gained access to a remarkable now compilation, Cooks Pioneer Lewis Families.  Having exhausted all leads, I dug into Cook's books hoping to find the elusive George H. some other place.

The effort was rewarded -- I found George Harvey Lewis; He was born march 26, 1801, died July 31, 1874 (these dates identical to those on his tombstone).  His parents were John and Elizabeth Harvey Lewis, and his birthplace was Bon Homme, St. Louis County, Mo.,  His wife was Catherine ___ and their children were George H., William, and Anne E., same as the names in the probate papers, except there Anne was Ann E. Morris.  Ancestrally, he was give generations removed from the North Cumberland County, Virginia in 1697.  That's it -- only the bare bones -- no follow-up on survivors.

No further record in that book, but in a 1974 newspaper article a tiny ray of light was shed.  On February 22 that year, the Miami Herald printed an article concerning a cousin of George Washington who was buried in Cape Girardeau, Mo.  The story came from Mrs. Eunice Lewis Reynolds of Pompano Beach, Florida, and was a reprint of a piece appearing in the Missourian in February 22, 1938.  The clipping had been sent to her father, Thaddeus M. Lewis of Fort Lauderdale, son of George W. Lewis and grandson of George H. Lewis (George H. had four sons according to Mrs. Reynolds).

So the identity of the man was now established, but who had married whom away 'back' when to bring about a cousinship to George Washington?  perhaps a scrutiny of the Balls -- Washinton's mother was a Ball -- might provide the answer.

It did, and promptly, Mary Ball Washington had a younger sister, Sarah.  Sarah Ball married William Harding.  Two Harding daughters, Hannah and Frances, married brothers, John and Samuel Lewis.  A check of the pedigree of George Harvey Lewis (in Pioneer Lewis Families) revealed that he was the grandson of John and Hannah Harding Lewis!

So -- Hannah Harding was Washington's first cousin, her son, John Lewis, was his first cousin once removed, her grandson, George H. Lewis was his first cousin twice removed!  Strictly speaking, the two Georges could not have been second cousins (a fact of little importance to anyone except me -- I had a point to prove).  If only the inscription had told it like it was, the man beneath the stone could have been put in his proper place with a lot less trouble!

Yes, George Washington's cousin is buried at OL - From the Morgue by Sharon Sanders (There are also newspaper articles on this page.)

The Cape Girardeau County Genealogical Society was organized in May 1970, a non-profit organization, its primary purpose is education in the field of genealogy. Membership is open to individuals upon payment of the annual dues of $10, or a couple for $15, per year, beginning in May. Life membership is available for a one-time payment of $250.

CGCGS publishes a quarterly "The Collage of Cape County" in March, June, September, and December, sent free to members. All members are encouraged to submit articles for publication.